I Know This Is Going To Sound Weird, However This Could Very Well Be The Best Advice You Will Ever Receive For Profiting From Your Business... 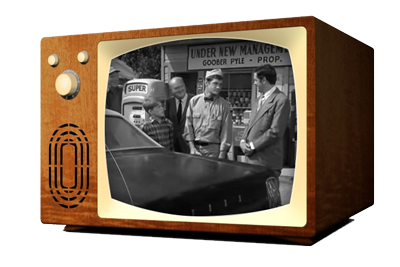 Read On To Discover How A Character From A B&W Television Show From The 1960s Made A Crushing Mistake That Almost Bankrupt His Business And How You Are Likely Doing The Same Thing Without Even Realizing It!

(Hint: I'll Give You A Simple Fix That Is Certain To Turn Things Around For You.) 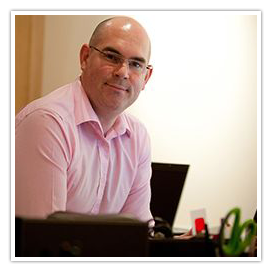 In an episode of The Andy Griffth Show, mechanic and gas station attendant Goober Pyle purchased "Wally's Filling Station" to become the boss, the business owner, the executive.

As people gathered for the big Grand Opening, Goober proudly pointed out the new sign with his name on it, told about great changes he was making, shared his new jingle and explained why he had hired someone to do the manual labor because now he was the "executive".

The local sheriff asked to be the first customer under the new proprietor but when the attendant attempted to pump gas into the squad car, nothing happened.

Everyone Was Gathered But Nobody
Was Buying!

You can just about feel his pain can’t you? Now here’s why I’m sharing this story with you…

And then… nothing. Can you imagine? I’m talking…

No Sales. No Interest. Not Even a Nibble From a Prospect. Just Tumbleweeds Blowing Through Your Paypal Account…

Ouch, right? And if you think this couldn’t possibly happen to you, think again. Every day all over the internet it happens to dozens of marketers.

WHAT'S THE MATTER?
THEY FORGOT TO ORDER GAS!

You can have an amazing product but if you forget the all-important thing that convinces people to order, you're going to waste your traffic. You're going to find out that "everyone gathers but no one buys."

You see, in many cases (perhaps most cases) a lack of traffic conversion (getting your visitors to buy) comes down to one problem…

Writing a good sales letter isn’t about stringing a few grammatically correct sentences together.  If it was that easy, your high school English teacher would be a million-dollar copywriter.

I understand this all too well. I’ve been crafting sales letters for a long time. These letters have created tens of thousands of sales for me over the years, which has provided a very comfortable lifestyle for me and my family.

I don’t say any of this to brag. Rather, the point is that I know how important it is to create a good sales letter. You can create the best product in the world but if your sales letter doesn’t do its job, then you’re gonna feel like Goober Pyle when the pump was activated but nothing came out.

Don't Be A Goober!

The good news is you’re going to find out how to avoid that sort of disappointment right now. 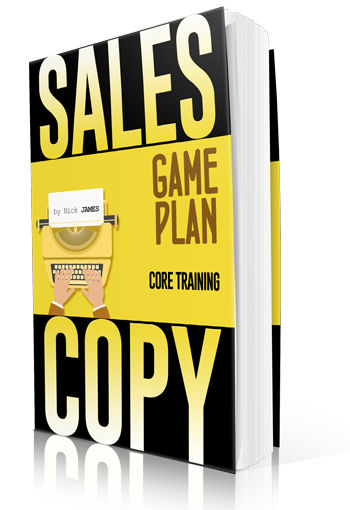 Let’s cut to the chase…

Learning how to write good sales copy is one of the most valuable and profitable skills you can pick up in your business career. Because once you know how to craft irresistible, sizzling sales letters, then you’ll have the power to sell anything to anyone!

That’s why I’ve put together this 50+ page hands-on course, where you’ll get a step-by-step guide for crafting high-response sales letters. This includes:

You will learn how to do all of this, plus you will:

By The Time You Finish The Daily Assignments, You’ll Have Your Own High-Response Sales Letter In Hand And You’ll Be Ready To Take Orders!

Here’s why so many others love this course and why you will too:

And so much more. Whether you’re a beginner OR you’ve written a few letters before, this course will help you create better sales copy!

Now, this course gives you the instruction you need to write a really great sales piece. But when you order now, I’m going to toss in a package of bonus tools and tips you can use to really ratchet up your response rates!

Order Now And You Also Get These Five Bonus Tools, Tips And Tricks To Create Better Copy Faster And Easier Than Ever Before! 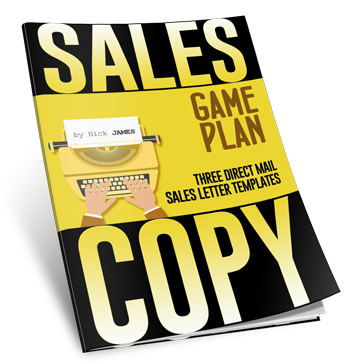 Your product is done. You’ve worked out your marketing plan. Now there’s just one thing left for you to do…

Except you’re exhausted. You’ve likely spent long night after long night finishing your product. And so writing a sales letter sounds like a lot of work. (It is.) And hiring someone else to write it sounds expensive. (Right again.)  Good news –

Now you can save yourself both time and money by using these three templates to quickly and easily create your sales letter yourself.

All you have to do is insert information where indicated by the brackets – and boom, your letter will be finished in a matter of minutes.  Here’s what you get:

These templates are easily worth $20 each, but they’re yours free when you purchase the Sales Copy Game Plan today! 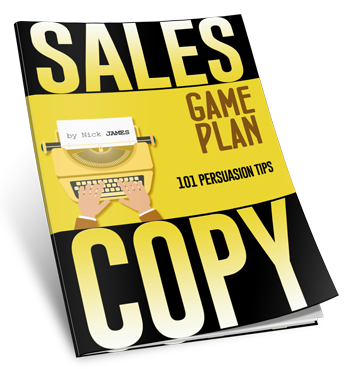 I sell this 26-page report elsewhere for $24, but it’s yours free when you purchase the Sales Copy Game Plan today. You’ll get 101 tips for writing better sales copy and boosting your conversions, including:

If you want a high-converting sales letter, then you need to read this report! You’ll get instant access to it as soon as you place your order below.

And that’s not all. Here’s what else you get when you order now… 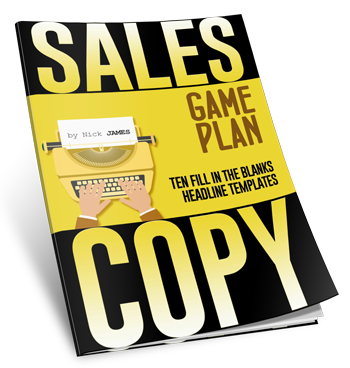 So you’re writing a sales letter or other advertisement. And you know that one of the keys to writing a great piece of copy is to brainstorm as many headlines as possible.

But sometimes it’s hard to get started.  Sometimes you just stare at a blank computer screen, trying to figure out how to engage your prospects. Brainstorm dozens of headlines? Heck, sometimes you can’t even write one good one!

That’s where these templates come into play!

Just fill in the blanks and in minutes you’ll have ten fantastic headlines based on some of the highest-converting headlines ever used! 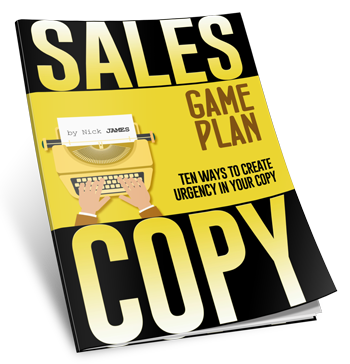 BONUS #4 - Ten Ways To Create Urgency In Your Copy

Your prospect is interested in buying your product. Maybe his mouse is even hovering over your buy button. But then he bookmarks your page and tells himself he’ll come back and buy later.

Except later he’s not in the buying mood any more.

Life gets in the way. Maybe he even forgets about you and your offer completely. And you lose the sale and a customer.

You need to create a sense of urgency. You need to get your prospects buying right now. And that’s exactly what you’ll find out how to do in this guide, including:

And more! This guide is yours when you order the Sales Copy Game Plan package today.

And here’s one more bonus… 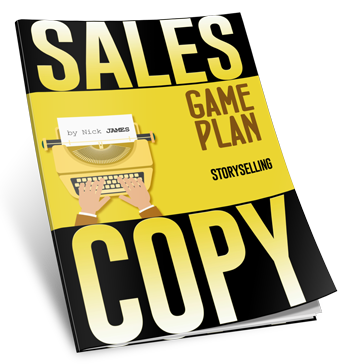 BONUS #5 - StorySelling: How To Tell A Story In Your Copy

Some call it storytelling, but I call it storyselling! That’s because a good story can stir up powerful emotions and responses that work like magic to generate sales!

But here’s a big problem…

A lot of people don’t know how to tell a good story. If you do it wrong, the method backfires. Instead of getting people running for your buy button, you’ll get them hitting the back button.

That’s why you’ll want to read this short report, which includes:

You too can become a story-seller once you read this crash course. And best of all, you’ll get instant access to it when you place your Sales Copy Game Plan order today!

Which brings us to this question…

How Much Does It Cost?

If you hired a copywriter to craft your sales letter, you’d pay well over $1000.

If you purchased these pieces separately, you’d pay well over $100.

So all this probably makes you wonder how much you’ll need to cough up to get your hands on this 10-day copywriting course and five bonuses.

If you order now, you’ll get instant access to everything shown on this page for just $47.

This is a killer deal. If these strategies create just one or two extra sales for you, you’ll recoup your investment fast.

But frankly, I’d be a little embarrassed if you were only able to generate one or two extra sales. And that’s why I’m offering you this money-back guarantee… 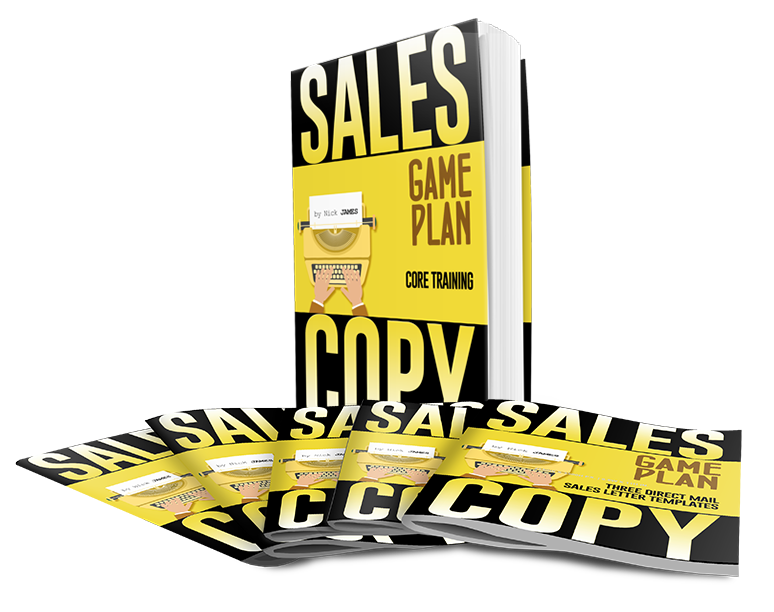 HERE’S YOUR MONEY BACK GUARANTEE

I’m so sure that you’re going to absolutely love the Sales Copy Game Plan that I’m willing to put my money where my mouth is. If you order today, you get instant access to everything and a full 30 days to review all the materials. If you’re not absolutely thrilled for any reason – if this package doesn’t help you create better sales letters – then all you have to do is contact me within 30 days for a prompt and cheerful refund.

You know this guide is exactly what you need to start generating more sales, so…

Immediate Download Available For
All Materials In The Copy Box Package

Yes, I want this course and bonuses for just $47!

YOU WILL RECEIVE THE PACKAGE INSTANTLY
(Even if it's 2:00 AM on a Saturday)

You will receive the Sales Copy Game Plan course and bonuses
instantly, right after your payment.

* Every effort has been made to accurately represent this product and its potential. Please remember that each individual’s success depends on his orher background, dedication, desire and motivation. As with any business endeavor, there is no certain guarantee that you will earn any money.

No additional coupons or discounts available for this promotional package.

P.S. Perhaps you're wondering, "There are a lot of sales copy courses out there, why should I buy THIS one?" Here is the short answer: this is THE "best bang for the buck." I've never come across a course in this price range at this high quality. Courses nowhere near the quality of this one are sold for 5X more ... this is easily worth $97. Easily. PLUS, this is SIMPLE to follow. Easy assignments. Lots of examples. Step-by-step.